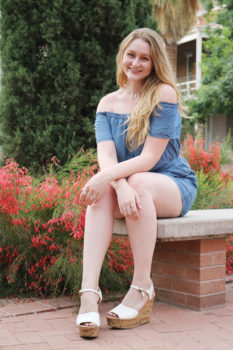 When TWOQC began its scholarship program in 2016, they concentrated on young women who were heading for a traditional four-year college. In 2017, they decided to also consider those who might be going to a community college either as a stepping stone to a university or to obtain a certificate degree. One of the criteria that has been important to scholarship committee members in addition to academic excellence is volunteer work. These young ladies excelled in that area. Two early graduates have kept in contact with us since they left high school.

Kayla Christiansen graduated from Sahuarita High School in 2016 and headed for the University of Arizona (UA), where she majored in nutritional sciences with a dietetics emphasis and selected a psychology minor because she saw the very strong connection between these two fields. Even though she had an over the top GPA in high school, she said that completing her college degree was one of the most difficult things she had ever done. Just like when she was in high school, Kayla had many opportunities to volunteer while at UA. Volunteer hours were a part of the curriculum for a number of her classes and proved a necessity for her internship program application.

Coming from a very close-knit family that lives in the Sahuarita area, Kayla hoped to be able to remain in the area if selected for an internship and her diligence paid off. She is one of only three candidates who were accepted for the dietetics internship with the Carondelet Health Network. This nine-month intensive program will begin in August.

Daniela Reynolds from Sahuarita High School’s Class of 2017 dreamed of becoming a dental hygienist since she was a child, probably inspired by an aunt who worked in and enjoyed that profession. Even though she was not seeking a college degree, her application was so compelling that she was selected for a scholarship at Pima Community College, where she recently earned an Associate’s degree in applied sciences. She took classes part-time because she was working at several jobs to include child care at both a church and a gym where she subsequently became a supervisor. Her industry paid off when she was selected to go to Albuquerque to teach others about the skills and attributes needed to manage a daycare facility.

There is currently a waiting list to enter the dental hygienist program at Pima, but being an industrious young lady, Daniela continues to work and save so she can return to school to further her education and be certified as a hygienist.

We wish these outstanding ladies success in all their future endeavors.