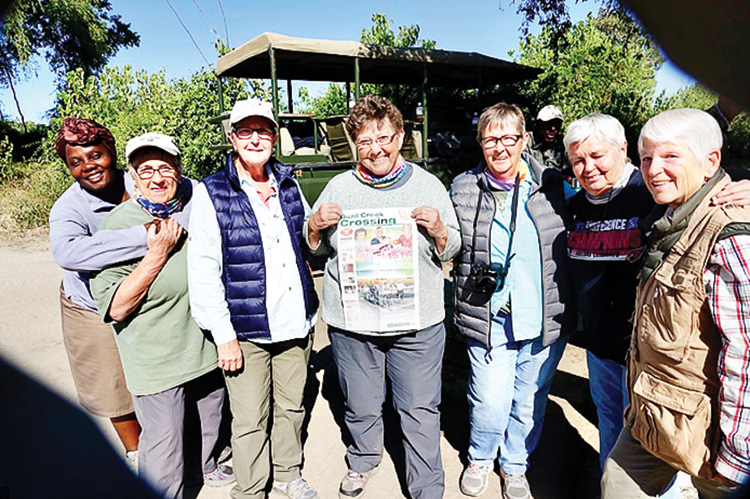 Peggy Kimes, a talented member of the QC Fine Arts Club, taught a class on how to enjoy sketching and keeping a sketchbook while traveling or just in daily life. She challenged members of the club to work on their own sketchbooks. She presented a challenge to draw or paint something in a sketchbook every day from May 15 until June 12. To add enticement to the challenge, there would be a drawing for a $25 Arizona Art gift certificate for one of the members of the challenge. Ten members completed the challenge and, on June 15, eight members came together to share their work. Mary Smith was the lucky winner of the gift certificate and plans to use it for more art supplies.

Each sketchbook was different. Dusty Friedman’s sketchbook was filled with memories of her recent trip to the South of France; Judy McCormick shared some colorful sketches of Canyon de Chelly and told about her sketches of several beautiful places in Colorado; Peggy Kimes traveled to Northern California, and her sketches were of her relatives and some of her efforts to learn to draw active people. Vicki Bengeult and Mary Smith created some exciting and interesting designs using different techniques with watercolor pencils, inks and pastels. Ginny Hutcheson created a diary of small sketches from her daily activities around Quail Creek and Tucson. Cheri Reynolds sketched colorful pictures of people and animals with her pencil and paint. Steve Piepmeier found he enjoyed an old technique of quill pen and ink and watercolor to paint pictures from all around southern Arizona. Marilyn Wettack even participated from afar as she is in Michigan. Susan Branch was unable to attend but had previously sent Peggy Kimes some pictures from her sketchbook. Peggy presented a slide show of sketchbook pictures that had been submitted from the group.

The group enjoyed their pictures, the challenges of completing a picture every day and trying different mediums. Some found it more difficult than they anticipated. Most of the artists found that they wanted to continue drawing and even decided to meet at the Desert Meadows park early every other Tuesday morning to plein air paint or draw together.