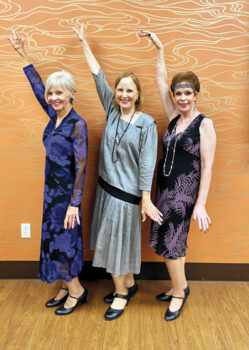 The Kino Center was hopping on Aug, 30, when 30 members of The Women of Quail Creek showed up in their glad rags to learn about flappers, fads, and fashions of the Roaring Twenties era.

The evening started with a fascinating presentation by Sharon Krueger that featured images and narrative capturing the history and trends of this unique period in American history.

Coming on the heels of the first World War and the deadly scourge of the Spanish Flu, the decade was characterized by dramatic social change. America’s youth demanded more freedom and craved new experiences, pushing the conventional boundaries. Prohibition went into effect in 1920, with bootlegging, speakeasies, and Al Capone not far behind. Jazz music and clubs became wildly popular with artists like Louis Armstrong and Duke Ellington.

Economic prosperity unlike any previous decade fueled a “consumer culture,” along with new inventions and technologies in radio, film, and transportation. Many households benefited from the addition of electricity, telephones, refrigeration, and automobiles.

The 1920s were also a significant decade for women. The 19th Amendment, granting suffrage to women in the U.S., was ratified on Aug. 18, 1920. The most familiar symbol of this decade was the flapper, a young woman who cut her hair into a bob and purportedly smoked, drank, used unladylike language, and hung out at speakeasies and jazz clubs. However, although many young women did experiment with both the flapper wardrobe, which included shorter skirts, and the new “scandalous” dances such as the Charleston, few engaged in the more outrageous behavior attributed to the true flapper.

After sharing these 1920s highlights, Sharon Krueger, Dodie Prescott, and Sandy Boyer demonstrated the Charleston in a short performance, and then invited those attending to join them on the dance floor for an impromptu lesson. If laughter and giggles are any indication of fun, then this event would have to go down as a true hit for all who participated!

This program was a teaser for the annual Membership Appreciation Luncheon on Oct. 25, when music, entertainment, and even a signature cocktail will all center on a Roaring Twenties theme. Members are encouraged to break out their beads and fringe and come on out for guaranteed fun and a few surprises!