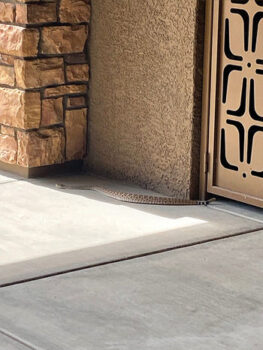 One would think that the concerns at the glass lab would be injury from glass. This could be scratches or cuts or perhaps glass fragments from the glass grinder. These things are very rare because of good equipment and the instructors have safety instructions that are carefully monitored. So what has been a recent concern?

One morning, one of the kiln monitors was in the kiln room and saw a big rat. The kiln room is open at the ceiling which has metal grating that allows the escape of heat from the kilns and keeps unwanted birds or other animals out. There is an outside metal door that has a 2- to 3-inch opening at the base of the cement floor. On a following day, the same monitor was in the kiln room and saw a rattlesnake with a central bump in its body, which she concluded was not a baby bump, but the consumed rat. The monitor called the fire department and followed the snake out of the kiln room and was able to identify the location to the fireman who captured and removed the snake without incident.

Several days later, one of the instructors noted what appeared to be a bat clinging to the ceiling in the glass lab. She called her husband to see if he had his fishing net and, of course, he had it since he is from Minnesota. He arrived with a step ladder and used his fishing net as a butterfly net and was able to capture the black intruder, which was not a bat, but a large black witch moth. These moths migrate from South America and Mexico this time of the year and have a 6-inch wingspan, and are often initially confused with bats. They are harmless insects.

Life is back to normal in the glass lab, which as noted is “wo-manned” (not manned) by very capable, skilled, and artistic instructors. It is worth a trip to the glass lab—in the Arts and Crafts building—to see some of the glass creations in the for sale display. It is indeed an art and a craft that glass can be used for making interesting and striking art objects.