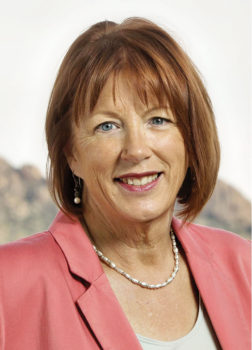 Dr. Jo Holt, Pima County Democratic Party Chair, will be the guest speaker at the Democratic Club of Quail Creek meeting on Saturday, March 18, 3:00 p.m., at the Kino Conference Center (next to the golf shop building). The public is welcome to attend.

She will be speaking about how Democrats’ grassroots organizing efforts and networking are some of the strategies planned for getting more Democrats elected in the 2018 mid-term election.

“In our Legislative District Two committees, passion and excitement are at an all-time high; many are in the process of conducting reorganization meetings and electing their future leadership,” she said.

Dr. Holt was born in Texas and grew up in a rural community south of Houston. She’s a mom, a former caregiver, a lifelong Democrat and had a rewarding career as a research scientist. She first came to Tucson as a postdoctoral fellow at the University of Arizona and returned many years later to Oro Valley. She ran for the Arizona State Senate in 2012 and 2014. “My career in scientific research brought me to Tucson, via Texas A&M University (bachelor’s degree in Chemistry in 1975) and Colorado State University (PhD in biochemistry in 1982),” she said.

“Scientists never really retire, but I chose to take a formal retirement from Washington University School of Medicine (St. Louis) in 2006 to care for my husband Gary, who passed away from early-onset Alzheimer’s disease. I returned to Tucson and became active in politics, mostly out of great concern for the increasingly extremist political climate in southern Arizona.”

“Groups around the county are coming together on a grassroots level to discuss how we can create a stronger community to stand against the bigotry of the current administration. As a Democrat, I am thankful for this uprising.”