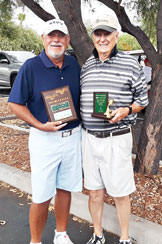 On Tuesday, July 23, the Quail Creek men’s club presented Wally Howard and Brian Kuehn with trophies for their stellar achievements earlier this month. Brian Kuehn made an cce on Coyote 4 on July 6. Then, on June 19, Wally Howard made an “albatross,” also known as a “double eagle”, which occurs when a player scores a three-under-par on a single hole. This is commonly achieved with the second shot going into the hole on a par-5 but can also be done with a hole-in-one on a par 4. Wally made a two on Quail 5, a par 5.