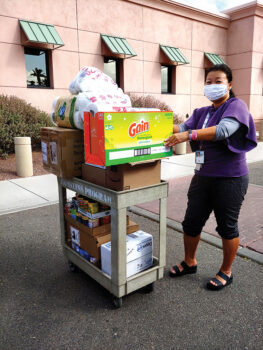 One of the dozen VA staff who helped unload the vehicles. (Photo by Peggy McGee) 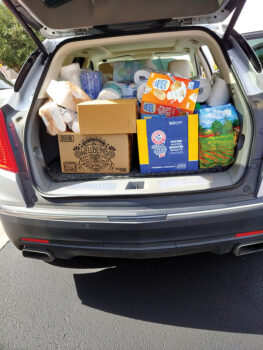 The first ever canned goods and paper products drive for homeless veterans, held on Oct. 24, rose above our highest expectations thanks to the generosity of the Quail Creek community. The Women of Quail Creek ladies, who collected the food at the four locations, all commented on the variety of foods chosen. So many had gone out of their way to find items on the veterans’ preferred food list in flip-top cans. The single-serve meals will be a big hit with the veterans, as will the canned meats and fish, as well as the snack items.

There was evidence that many of the residents made the trek to Costco with the large packages of Vienna sausages and mac and cheese, not to mention the granola bars and paper products that were dropped off during the no contact event.

In the end, it took three large SUVs and two sedans to transport the donations to the VA. The VA’s response was, “Wow. We cannot believe you were able to get so many donations in a two-hour period. Quail Creek is always so supportive of our veterans.”

The Women of Quail Creek, along with the staff of the homeless program at the Tucson VA hospital, extend their sincere thanks to all who supported the no-contact canned and paper goods drive.