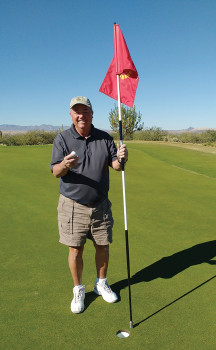 It doesn’t happen often, but when it does it’s a wonder to witness and a special joy if it’s yours. Desert Duffer Bob Van Dyck sunk a hole-in-one on the par 4 fourth hole of Roadrunner on November 21.

Bob used an easy driver for the 227 yard shot. According to Dan Cerny the shot carried the traps, hit the green and rolled about 10 feet arching into the hole. “We were able to watch it all the way in — unbelievable! Has to be a rare hole-in-one to have done it with a driver.”

Russ Sipe opined, “Holes-in-one are very difficult; you must be very good or very lucky to accomplish on a par 4—incredible!” Maybe that day Bob was a little of each.

Asked how he felt, Bob said, “It was a great surprise, I was very lucky.” He also indicated he was trying to fade the ball and got (in this case anyway, the not so dreaded straight ball.

Bob joined the Quail Creek Desert Duffers in 2012 after moving here from Iowa. He started playing golf in 1966. This is his third hole-in-one. Previous ones were in 2005 and 2009 in Iowa.