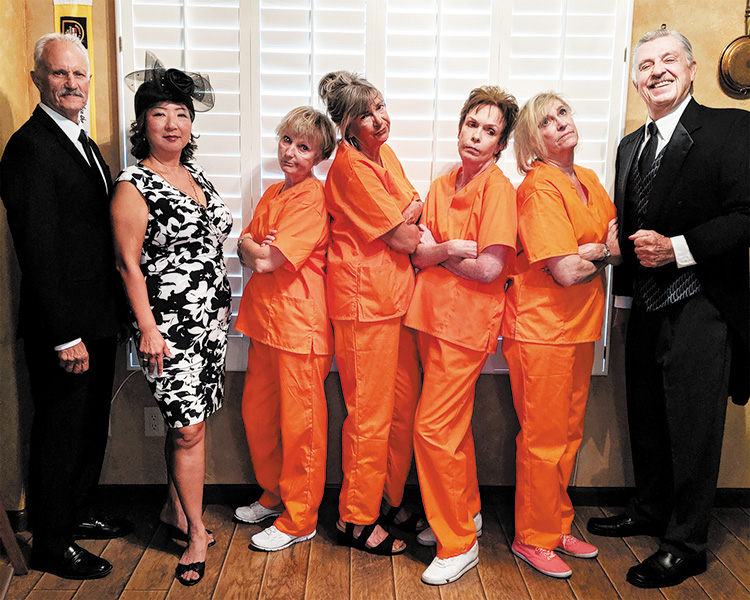 Next up is the twelfth murder mystery written by Davey Jones and performed by an amazing, talented cast. Initially set in the women’s section of the Tucson Federal Correctional Facility, there are four convicted murderers about to escape and set up as performers at the Crystal Cabaret. In spite of their virtuous looks, Pam Campbell, Sandi Hrovatin, Dodie Prescott, and Claudia Andrews have already displayed their penchant for violence, so there is a danger to others when they are sprung from prison.

Musical numbers include those from the shows Chicago, Damn Yankees, plus those made famous by Ella Fitzgerald, Shirley Bassey, ABBA, Edison Lighthouse and Louis Prima. At the Crystal Cabaret, a conspiracy evolves and places not only the owner, played by Davey himself, in danger but the girls’ “social worker” (Mike Vance) and music director (Chris Moravchik) might be collateral damage, too!

The show starts promptly at 6 p.m. with the entrée served around 6:15 p.m. It will consist of pork loin with mushroom demi, mashed potatoes, and California vegetables. A cash bar will open at 5 p.m. Following the main act, chocolate mousse cake will be served together with “solution forms.” A third and final act will uncover the truth, and you just might win a prize.

Nineteen tables of eight will be set up and the ballroom middle partition will be closed for an intimate setting. Show dates are Tuesday through Thursday, Jan. 28, through 30. Tickets are just $29, which includes two-course meal, tax, gratuity and the show. You can purchase tickets at the concierge desk beginning Monday, Nov. 18, with cash, check, Robson card, or credit card. So, get together with friends and perhaps buy a table of eight. This promises to be as much fun as past sold-out murder mystery comedies.