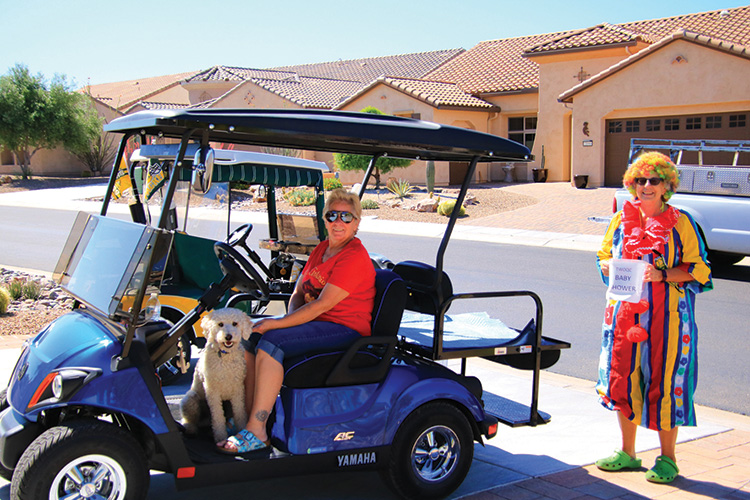 Janet Wegner as a clown (Photo by Monte Hudson) 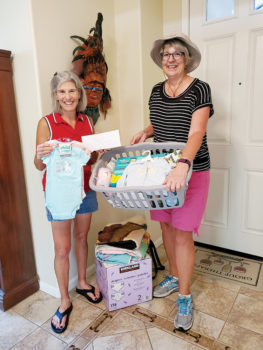 Karen Baker (left), chair of TWOQC’s baby shower committee, is presented with a check for $320, along with a laundry basket full of baby items and diapers courtesy of the Lady Putters from Janet Wegner (right). (Photo by Monte Hudson)

This year is different from past ones for The Women of Quail Creek’s (TWOQC) Military Baby Shower. With the closures of the Madera clubhouse and Anza, there were no good drop-off places for donations. But, the ingenuity and resourcefulness of the committee allowed for monetary donations for the baby shower. Around 25 people volunteered their skills to make fabric masks for the Quail Creek community, and approximately 1,425 masks were distributed. Additionally, donations were received from Cathey’s Sew and Vacuum, Maxwell Aesthetics, Sykora Financial Group, Quail Creek Veterans Golf Association, Quail Creek Lady Putters, and Quail Creek residents. More than $14,000 was raised for the baby shower. In addition to cash, the Lady Putters donated diapers, clothing, and other baby items.

Then the news came that the actual baby shower will not happen this year. The Arizona Air National Guard base is limiting outside personnel access. But, all is not lost. On June 13, the date set for the shower, Baby Shower Chairperson Karen Baker and a small number of committee members will set a time to come to the base and hand out the baby shower gifts to the 25 expectant families. With the money donated, baby clothes, strollers, and Target gift cards were purchased for the new parents. Some of the funds also will carry forward for next year’s baby shower. In addition, 1,000 hand-made items from the committee members, donors, and volunteers will be distributed to these families.

In a difficult time such as this, the Military Baby Shower Committee and TWOQC still stand strong to support, honor, and serve our active military families.