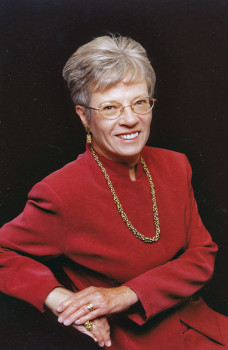 As she stepped down as president, Peggy McGee wanted to share some thoughts with the Quail Creek Community. She related that back in 2009 when club founder and President Joy O’Farrell and the board of TWOQC asked her to take the presidency, she was reluctant to take on the job. She said she was rather shy (though no one believes that) and not sure she could keep up with the club Joy had founded. Now affectionately known as the Energizer Bunny, she not only kept up but took the club to new heights.

Shortly after moving to Quail Creek, Peggy heard comments that some in Green Valley thought Quail Creek residents were snobbish, only caring about themselves and golf. She learned this was absolutely not true and often marveled at the generosity of the residents. When she became president, the club had about 120 members. She was amazed at how quickly the club grew when TWOQC ventured outside the gate and took up projects that helped others. Membership now hovers at the 400 mark.

Because of the many TWOQC volunteers and the outstanding support of the community, sales of A Taste of Quail Creek cookbook generated almost $11K in profits which were donated to the Food Bank. The club’s second cookbook, A Shared Table, raised $7K for Genesis House to benefit victims of domestic abuse. Each year the club has collected thousands of items for homeless veterans in the Tucson area due to the many residents supporting the annual clothing drive. In April 2016, the club will award two $1,000 scholarships to female students from Sahuarita and Walden Grove high schools’ senior class. This was made possible because the community purchased 600 thermal totes and members donated spare change and piggy banks at the monthly meetings. TWOQC members and nonmembers support the annual baby shower for military moms by knitting, crocheting, sewing and quilting items and shopping for baby supplies. WWII and Korean War veterans who went on Honor Flights enjoyed reading the many letters residents wrote thanking them for their service. The Food Bank also benefitted from the club’s support.

Turning over the reins to Carol Mutter, Peggy expressed appreciation to the community for their overwhelming support over the past six and a half years. That support made her job really enjoyable and put TWOQC in the spotlight.

Will she fade into the sunset now that she is no longer president? Not while she is still kicking and breathing. Peggy so believes in everything the club stands for that she will continue to be involved as third vice president for Community Relations and as a member of the Program Committee.

With so many other volunteer activities on her calendar, when asked what she will do in her spare time, she replied, “Spare time—-what’s that?” The word no is not in her vocabulary when someone asks for help.

TWOQC thanks Peggy for her inspiration and dedication and welcomes Carol Mutter as the new president.