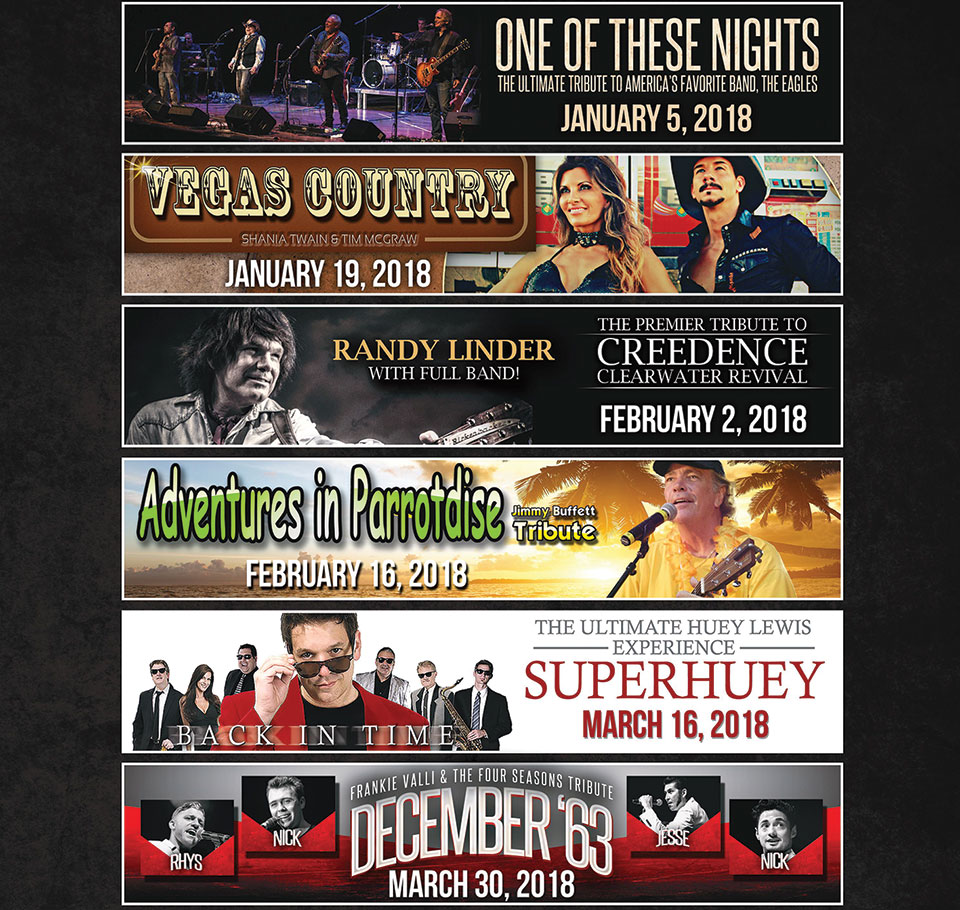 The show features the band’s greatest hits like Hotel California, Desperado, Lyin’ Eyes, Life in the Fast Lane, Take It Easy, Already Gone, One of These Nights and many others – all presented in a highly entertaining production with uncanny accuracy. It was these and other Eagles’ tracks that earned the band seven No. 1 singles, six Grammys, five American Music Awards and six number one albums.

Donna Huber is the world’s No. 1 tribute to Shania Twain! So much so that Shania herself said, “I thought that was me for a moment—she’s the best one!” Close your eyes and it’s just like being at a Shania concert!

He has marketed his love of beaches, bars, boats and ballads into a billion-dollar business. He has sold more albums and filled more concert venues than most musical superstars. He has written best-selling books and has a string of successful Margaritaville store/cafes. Buffett’s fans are affectionately known as Parrot Heads. They are found in every demographic and walk of life and are among the most loyal fans in the world. The tropical appeal and state of mind known as Margaritaville exists in all of us. It may be the lure of the tropics or some other “parrotdise” wherever; Jimmy’s music can take you there and so can this show.

Barrie has been performing Buffett’s music for almost as long as Buffett himself. He has also traveled many of the same roads and even played some of the same places Jimmy played on his road to fortune and fame. He takes the showgoer on a musical tour through an “All you can eat Buffett.” Barrie sings all the songs you know by heart like Come Monday, Cheeseburger in Paradise, Changes in Latitudes, Changes in Attitudes and the national anthem of all Parrot Heads, Margaritaville. He also performs songs Jimmy recorded like Van Morrison’s Brown Eyed Girl and the C, S, N&Y’s nautical hit Southern Cross as well as contemporary hit recordings like his duet with Alan Jackson, It’s 5 O’clock Somewhere and Zac Brown’s Knee Deep. Jimmy Buffett Coral Reefer Band member and alumni Roger Bartlett (original duo partner and lead guitar player with Jimmy Buffett) is featured in the show making this the most credible and authentic Buffett tribute show anywhere. Other Coral Reefer Band members that can appear include Mike Utley, Robert Greenidge, Doyle Grisham, Amy Lee, Fingers Taylor, TC Mitchell and others depending on their tour schedule with Jimmy. According to the Coral Reefers, “Adventures In Parrotdise is the next best thing to being at one of Jimmy Buffett’s concerts.”

This is the only Jimmy Buffett tribute show to play an indefinite engagement in a main showroom at a major Las Vegas hotel/casino. It is also the first choice for major corporate events at Jimmy Buffett’s Margaritaville-Las Vegas.

Not a Parrot Head? You will be when this show is over. Fins up!

Huey Lewis and The News have carried the banner as the quintessential American rock band – endeared by millions of fans and earning them the right to mark their place in pop music history. With a nearly unbroken string of hit songs, their music became the soundtrack for a generation. During the 1980s and early 90s they scored a total of 19 top-ten singles across the Billboard Hot 100, Adult Contemporary and Mainstream Rock charts.

In 1962, the group released their first album, featuring the single Sherry, which was not only their first charted hit but also their first number-one song. The Four Seasons followed up Sherry with several million selling hits including Big Girls Don’t Cry, (their second No. 1 hit), Walk Like A Man, (their third No. 1), Candy Girl and several others. From 1962 to early 1964, only The Beach Boys matched the Four Seasons in record sales in the U.S.